The annual feast is celebrated as ” Puthunjayar perunnal ” in the name of Parish patron saint ‘ St George’. According to traditional belief, St. George (A.D.275 – 23April 303), a Christian Martyr, was a Roman soldier and priest in the guard of Diocletian. In Hagiography St George is one of the most venerated saints in the Catholic (western and Eastern Rites), Anglican and Orthodox churches. He is commemorated in the tale of St. George and the Dragon and is one of the fourteen holy helpers.

At Angamaly the “Puthunjayar perunnal” is celebrated on Sunday and Monday, which come just after the Easter. There is no clear evidence about the commencement year of this festival. In ancient years, Angamaly was infested with bushes and reptiles mostly snake; which created a fearful environment for the residents. To surmount this situation, the people used to keep aside milk, eggs, fruits etc as an offering.

Knowing this, the Christian missionaries tried to eradicate their phony beliefs by enlightening gospel. They imparted knowledge about the gracious and audacious St. George. Soon after, the people became obliged to St George (locally called Geevarghese ) by experiencing the miraculous   powers of St. George. The existing miraculous statue of St George at Angamaly Basilica was brought from Persia about six centuries ago. There are lot of mythical stories lively active about this statue among the people.

A folklore dance known as ” Thullal “, sometimes mockingly called ” devil’s dance ” , was used to play during this festival to attract people, which is now banned by the ecclesiastical authorities.This annual feast is one of the widely celebrated catholic festivals in Kerala, in which many people from all over South India arrive in legions, especially from Udmelpettu (Tamil Nadu), with prayers and offerings. The offerings by the people’s mainly constitutes models   and statues of snakes and eggs made of gold or silver, statues   of saints, hens , oil etc. The Octave is also celebrated on Sunday in grand manner 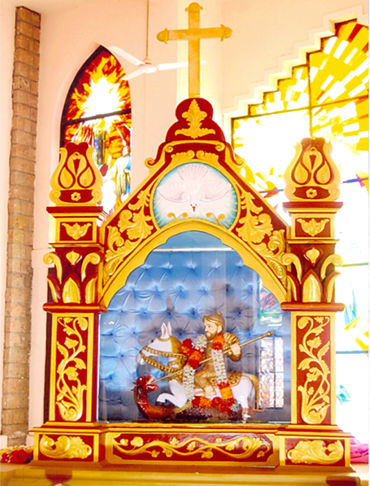