The present church in the name of St George (West church) was actually located at the bank of river (Maanjally River). There was a boat jetty locally known as pallikadvu (Church boat jetty) at northwest side of this church that was used till the end of the 19th century. In 2001, an investigation team identified the remains of laetrite stone steps (padavu). Earlier an extension of the river was directly connected with the boundary of the church plot and later due to the shortage of river water, the riverbed reformed as paddy field. At present, when rainwater floods during monsoon season in the paddy field, reflects the paddy field as river view, which recalls the ancient topographical similarity. Even though this location is not existent now, a clear and real proof is available in the Varthamanapusthakam.

In historical records, it is seen that there was a regional ruler, known as Mangattu Kaimal who resided near the church during the 16th century. An account seen in Jornada is as follows: “Before the Archbishop left Vaipicota the Caimal of Angamale (Kaimal of Angamali) came to visit him, whom they call the black king(Karutha tavazhi) of Angamale because there is another whom they call the white ( Velutha tavazhi), and both are reigning,because it is a custom among the Malabaris to have inmany places two and three kings of a Kingdom with lands distinct from one another, but all give orders,..” The remains of edifices of the King are still seen in a private property near the church. The king had donated large areas of land to the church, by exempting land tax. The typical boundary stones (thoranakallu) in different locations are still remaining near the premises of the churches. 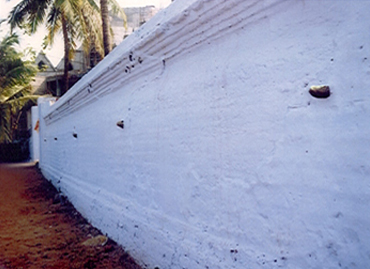 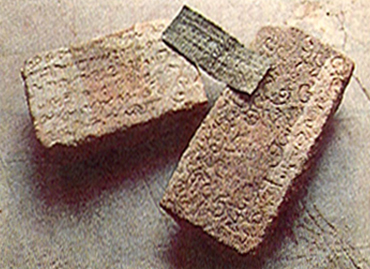 The documents relating to the lands indicate that a major part of the Angamaly area was assigned to the church in the early period. When the people from the other places migrated to Angamaly, they occupied the properties of church in different periods. Later, during the Revenue settlement done in the mid 19th century and the land rules established during the period 1945-54, the people having the land properties of the church on lease, became the owners of the same.

Dr. Buchanan in his letters ( 14th December, 1806) recorded about the peculiar sound of the church bell of Angamaly as ‘As I approached the town of Angamale in the evening I heard the “sullen roar” of the great bell reverberating through the mountains’. About 5 centuries ago, this bell was brought up from Portugal to Udayamperoor church. Later, it was pledged to Angamaly church for Rs.421/= (12, 00 chakra) due to the financial crisis suffered by the Udayamperoor church. This bell was manufactured by casting with special metals and its sound is extremely comfortable.The prayer ‘Hail Mary, full of grace, the Lord is with thee’… is inscribed fully on this bell in Latin language.

Ancient churches had mammoth walls (elephant walls) fixing rock lamps which surrounds the churches. These walls are very strong and its peculiar shape meant to resist the attack of elephants and enemies. The attractive mammoth walls of St. George church were demolished in 2005 and constructed new one in place of old mamooth walls. 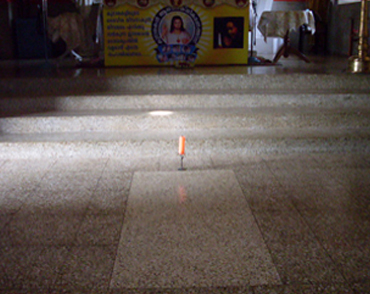 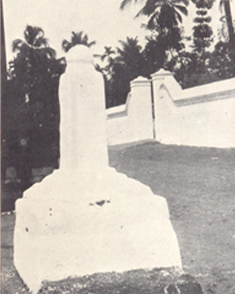 During the period of Tippu’s invasion of Kerala, he entered Angamaly in November 1789, by destroying the Nedumkotta (a fort), which was built exclusively aiming to protect Travancore from Tippu’s attack. Tippu Sultan attacked on three ancient churches of Angamaly including ancient edifices attached with the churches. The remains of the laterite foundation stones of the edifices can still be seen in the St George church ground. The façade of the ruined ancient St George church stood as the entrance of symmetry for more than two centuries and was demolished in September 2005. An account available in Dr. Buchanan’s letter (1806) is as follows:

” When Tippu waged war with the King of Travancore in 1791, he sent detachments in every direction to destroy the Christian churches, and particularly the ancient edifices at Angamale; two thousand men penetrated into the mountains, and were directed to the place by the sound of its bells. They sprung a mine under the altar walls of each church, and the inhabitants who had fled to the higher mountains witnessed the explosion. But the walls of the grand front being five feet and a half thick (I measured them yesterday), they did not attempt to demolish them for want of powder. In the mean timeTippu,hearing that Lord Cornwallis had invaded Mysore, Suddenly recalled his church destroying detachments.

Next year Tippu was obliged to sign any terms that were offered him;but Lord Cornwallis forgot to desire him to rebuild the Christian churches. The inhabitants, however have rendered them fit for public worship; and have proceeded some way in restoring the Cathedral to its former state. The Archbishop’s residence and all the other public buildings are destroyed. The priests led me over the ruins, and showed me the vestiges of their ancient grandeur, asking me if I thought their Zion would ever be rebuilt. Angamale is built on a hill. I told them, that their second temple would perhaps, have more glory than their first “.

“Two of the churches here are Roman, the third Syrian. But the two former would gladly return to their mother church”.

The renovation work of ruined St George’s church by Tippu was actually initiated by Paramakal Thoma Katanar and the work was completed after his period. This rebuilt church was partially demolished during 2003-04, for making facilities for the construction of new modern church.