It is well well-known that, the Syrian Christians of Kerala undoubtedly possessed a rich oral tradition and Christian accounts about Angamaly were splendidly available by means of folk songs and even in written annals. It is also strong belief that the ancient St. Thomas Christians had developed a life style of their own.  The arrival and mission work of East-Syrians in Kerala set off an incomparable faith in tradition, rituals and liturgy. The favourable Geographical features of Angamaly inclined the Persian missionaries to opt this location for their prime campaign centre in 15th and 16th centuries. There were Archdeacons (Head of community) and Bishops resided at Angamaly and ruled native Syrian Christians. Later, the interference of Portuguese missionaries on administration, rituals and liturgical matters etc of the native Syrian Christians blasted into community revolution. The place Angamaly adorned and witnessed as the prime center of prodigious community events steered.

The three ancient big Christian churches within a kilometer, located in a straight street at Angamaly are unique and marvelous in the history of churches. Angamaly was the first Archdiocese of Syrian Christians in India and the jurisdiction under this Archdiocese was extended over the whole of India (metropolitan w-tha rad-kollah hendo) till the end of 16th century. In 1565, Mar Abraham was ordained as the Metropolitan of Angamaly Archdiocese and the East church (Kizhakkepally) was the Cathedral church at that time. In 15th August 1577 foundation stone was laid for new East church (Kizhakkepally). In 1583 Mar Abraham consecrated newly built church in the name of Patron St Abbot Hormizad. In January, 1597, Mar Abraham died and his body was buried in the same church which he built. 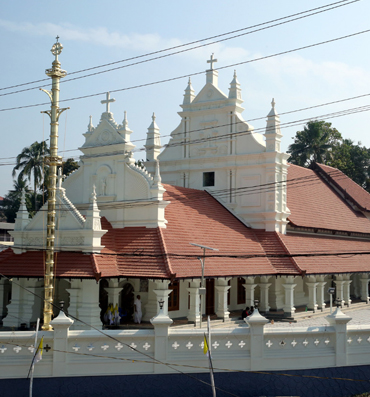 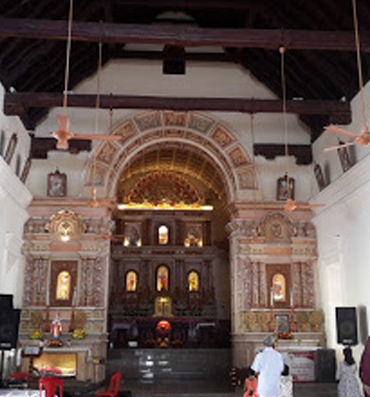 After the Synod of Diamper (A.D. 1599), Dom Alexis Menzes changed the patron of Cathedral church from St Abbot Hormizad to St Hormis Sahada. Subsequently, Angamaly was degraded as a suffragan of Goa and Francis Ross became bishop of Angamaly diocese in 1601. In 1608, Angamaly was again elevated to Archdiocese, but in 1609 the Archdiocese center was shifted from Angamaly to Kodungallur. In 1773, the right of Syrian Christians to attend the funeral function of Mgr Florence was denied by the Carmelite missionaries. This made Syrian Christians in very exasperate situation. Subsequently the representatives of 73 parishes came forward and convened a Maha Yogam (General assembly) at st Hormis church. In 1st February 1787, another important Maha Yogam was held at Angamaly for taking certain vital decisions which is very popularly known as ‘Angamali Padiyola’.

In 1790, Tippu Sultan attacked on three ancient churches of Angamaly including ancient edifices attached with the churches. In 1800s renovation work of St Hormis church was started which can be evidenced from the old Malayalam inscriptions seen on the wooden roof frame.  It is noticed that the maintenance and partial renovation works were also done in various later periods also. In 1950’s, during the period of Mgr. Rev. Fr. George kavallakkat, Vicar of Angamaly, Madbaha was renovated by setting up mosaic floor.

During the period 2005-2010, it was experienced very much difficulties to perform liturgical services due to the limited space, leakage of rain water through roof tiles and excretions of  doves and other birds. It was also noticed that the existing wooden roof structure became   partially spoiled and became unsafe.  Considering the dilapidated condition of the church it was convinced by everybody that a major renovation of church is essentially to be carried out. Accordingly, the renovation work was started in 2011. However, the progress of the work was very poor and it became active only in the middle of the year 2014 onwards. 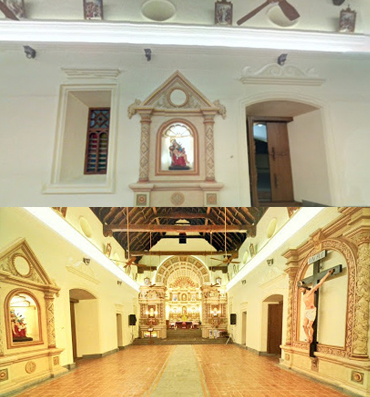 As per the testimonies and historical records, it was unanimously accepted that Mar Abraham died in 1597 and the body was buried in St Hormis church. In view of tracing out the burial remains of Mar Abraham, an attempt was initiated under the guidenance of Rev. Dr Kuriakose Mundadan (Rector & Vicar, Angamaly Basilica).  The work started to open surface layer of sanctuary floor (western side) on 17th September, 2015. During the tracing operation for burial site, an indication of tomb (cavity) having walls with laterite stones was found near the southern side of the Madbaha steps on 18th September, 2015. Consequent to this, the digging works temporarily bunged, so as to decide the further course of action.

In this connection a meeting of priest – laity, who were proficient in church history, was convened at Archbishop’s house, Ernakulam on 1st October, 2015 at 3.00 pm.  The meeting was chaired by Major Archbishop Mar George Alencherry. Archbishop Mar Joseph Perumthottam, Bishops Mar Sebastin Edayantruthu and Mar Jose Puthenveettil were also participated in the meeting. During the deliberations of the meeting, the participants contributed an assortment of ins and outs of information related with the tomb of Mar Abraham. After deliberations, a five member committee was formed to exam the realistic aspects of burial place of Mar Abraham and to recommend for further course of action to be taken. The nominated committee members by Archbishop Mar George Alencherry are Rev. Fr. Dr. Kuriakose Mundadan, Rev. Fr. Dr. Ignatius Payyappilly, Rev. Fr. Dr. Peter Kannampuzha, Prof. George Menacherry and Dr. Jomon Thachil.

The investigation work resumed on 2nd October, 2015 in the presence of committee members. The digging work continued over the Altar floor (from south to north direction) near to the previously identified cavity, located western side of Madbaha. It is observed that the partition of the cavity is attached with lengthy laterite stone wall lying north – south direction, approximately 3 feet below the surface of the Altar floor. Again while digging, another similar wall is also emerged, at the eastern side of the previous one, approximately 4.5 ft below from the Madbaha surface. The gap between these two walls is 1.25 ft.

These two walls are perfectly plastered with slacked lime. Patches of surkhi are also found out in the filled soil as well as in walls.  It is noticed that the dugout soil was contained a number of small clams and small masses of termitary blocks. Presence of termitary blocks indicates the chances of contact of moisture from outside the building structure. These facts support the fast decomposition of a buried body. A copper/ alloy chain with hooks, a rusted   piece of metallic plate and broken pieces of flat roof tiles are also unearthed from the site.

As a part of investigation, Smt. (Dr). Jenee Peter, an Archaeologist, arrived on 3rd October and collected samples of soil from various layers for further studies. By observing the site, she opined that there was an intervention in the excavated site after the burial of Archbishop Mar Abraham. Large content of black and white clams in the Surkhi compound are also observed, which dates back during the period of 16th century.

As stated above, the removal work of filled soil in the Madbaha, started from southern end. The area   of Madbaha is approximately 180 sq.ft (18 ft length, 10 ft average width).The rectangular unearthed portion (16ft length, 4.5 ft width), is lying almost in the middle area of Madbaha.  After a span of 3 days, the investigation work is again continued on 7th October in presence of committee members. Next day, a clear stratigraphy of the site is obtained. The investigation work is almost finished by 11.00 pm on 8th October. While digging the site, Dr Jenee Peter examined manually the dugout soil simultaneously. The grave fill was carefully removed and samples were taken. The fill was sieved for recovering small finds.The entire operation was done manually

Two circular post holes having diameters (1.25 ft dia – south and north end) probably meant for insertion of pillars, is observed on the emerged western side wall (approximately 15 ft length). Remains of decorated and designed pieces of surkhi compound are found out from the northern end post hole. This strengthens the belief of historical testimonies about the existence of old church. A burial chamber with plastered side walls and bottom is clearly emerged in to the site (7 ft length, 1.25 ft width, and 6.3 ft depth from the floor of Altar) at southern side of the excavated site. However, there is no clear such type of burial chambers seen in the same channel of northern side. While removing the steps of the Altar (south west side) a distinct black coloured surface layer (probably surface of old church altar floor) was found out, which is about 3.1 ft below the existing floor of Altar.